I always think of him as living in Missouri but like many people, Samuel Clemens left his native state and spent much of his life elsewhere. He fell in love with an East Coast abolitionist and stayed there to raise their children and write his stories. The home was not originally on our list of things to see just because I wasn’t aware it was there but a friend sent me an article about beautiful homes in America and we decided we had to see this one in Hartford, Conn.

The museum is so well put together and let’s be honest here, I’m getting to be a museum aficionado. We toured through some timeline rooms, studied photographs, watched a video and were completely prepared when our guided tour started.

First, the house is really unique (did you expect anything else from a guy who named himself after a riverboat navigation term?). It was made for entertaining and showing off, basically. For instance, he bought a huge, intricately-carved headboard while in Europe but when they brought it home, no one could see it from the hallway. Not wanting a fancy, covet-inducing piece of furniture to go to waste, Twain moved the bed around so it honestly blocks the entrance to the room and then he proceeded to sleep with his head at the footboard so he’d wake up each morning facing his investment!

The stairwell is designed so when guests look up from the bottom floor, it looks as though there are five or six landings above their heads when there are really just two more. Specially-ordered fireplaces adorn many of the rooms (they have split flues and are covered in mosaic tiles). One extraordinary tale our guide shared was particularly fascinating to us. She talked about a fireplace mantel which had disappeared when the house was damaged by fire many years ago. She showed us a photograph of the mantel and said that a young boy, upon seeing the photo on a tour, had said, “That mantel is in my granddad’s barn!” People (including his parents) scoffed a bit and no one paid much attention but the boy insisted and sure enough, mysteriously the Clemens’ family mantel was safely tucked away in a farmer’s barn for who knows how long. Now it is back in the house where it belongs.

The Clemens entertained four or five nights a week. They had indoor plumbing and a telephone (which Sam despised and never used). At least at first, all this opulence and extravagance was financed by Sam’s beloved (and super rich) wife, Livy. Then his writing took off and the couple didn’t have to dig into her inheritance anymore in order to maintain their lifestyle. They had three daughters and a son, only one daughter, Clara, outlived her father.  He saw three of his children and his wife die. He passed away only four months after Jean, his youngest daughter, who died of a heart attack brought on by an epileptic seizure.

Unfortunately, photography was not allowed in the house. All those nasty flashes ruin artifacts and Danny always tells them that he won’t use a flash but they never believe him (and who can blame them, he does look sketchy). So go see the home yourself, friends! Right across the street (literally) is Harriet Beecher Stowe’s home, as well. We did not get to visit it because our RV park was about to charge us an extra night’s rent if we didn’t move our little house on down the road. Next time… 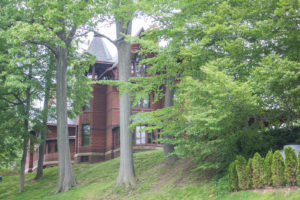 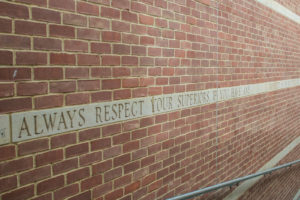 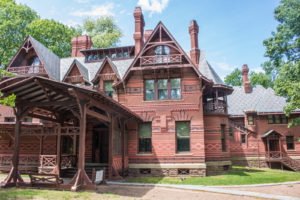