We woke up refreshed and bouncy. After a delicious breakfast, we hit the streets of New York with renewed fervor. We masterfully navigated the subway system and shared a chuckle at our naiveté from the day before. Honestly, Wellmans. It’s not that hard.

We found the financial district and stepped into the 9/11 memorial. It’s quiet there. Beautiful trees surround a plaza where two, 30-foot waterfalls (the largest man-made falls in North America) represent the two towers. All along the edge of the square-shaped falls victim names are etched in the black stone. People touch names and place flowers. It feels like the Vietnam Memorial in many ways. We sat on benches and people watched. We felt the Survivor Tree. It was the only living thing found in the rubble and has become a symbol for rebirth, freedom, carrying on. The National Park Service cared for it for over a decade before bringing it back to New York City. 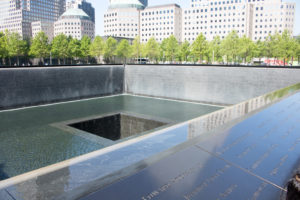 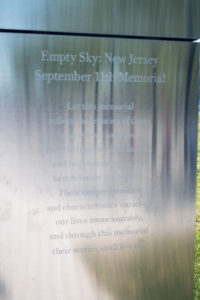 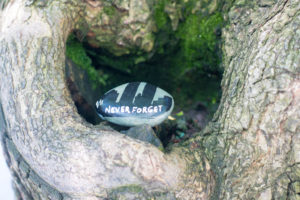 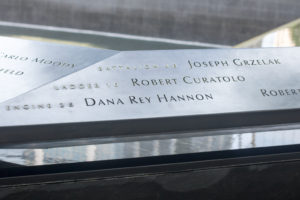 We did not enter the museum this time around feeling that our kiddos just aren’t quite ready. The museum building is imposing and reflective. We pressed our faces to the glass to see the giant, crossed beams so many of us remember from the clean-up process.

After absorbing as much as we could, we made our way to Battery Park. I should pause here and explain a mistake yours truly made several months back. I hesitated. While creating our NYC itinerary, I paused a couple of days to figure out the best time to visit the number one tourist attraction in the world. That was stupid. What I should have done was paid up, set our itinerary around that light-green lady and went with it. Well, what happened is that when I logged back on 48 hours later, we could no longer leave from NYC but had to haul bootie over to the New Jersey side. This meant that after arriving in Battery Park, we hopped a local ferry to NJ (we had no time for lunch so Danny bought each of us a bag of chips which we wolfed down while onboard), walked several blocks and hopped another ferry to Liberty Park. Huff, huff, huff. Then we went through security, stood in the oppressive sun while we waited for a boat and finally headed out into the harbor. 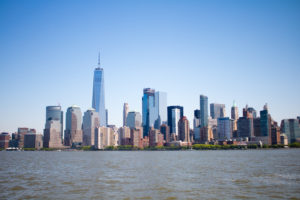 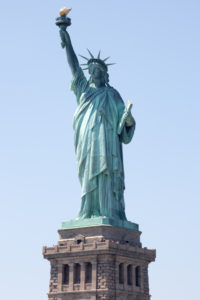 We chose to spend time on Liberty Island first and explore Ellis Island afterward. We disembarked and received our headphones so a pleasant Voice could tell us everything we could possibly want to know about the statue, the island and the sculptor. We went through security again (not sure where they thought we picked up knives or bombs between the time they screened us, baked us and sailed us but we understand they take the Lady’s security very seriously).

Then we climbed stairs. Billions of stairs. I was honest-to-goodness seeing stars like in a Looney Tunes cartoon. My legs shook. Finally, Paige (who was, I don’t know, ten flights up) hollered back that she was “going out now” and we all shouted at her to stay where she was and wait for us. We joined her on the top of the pedestal and went outside, all the while, the Voice continued to educate us. The spectacular view greeted us and my legs perked right up and agreed it was worth their near-death experience indeed. We wriggled around fellow tourists, navigating the narrow passage while gazing out, out, out across the water and up at The Statue of Liberty towering overhead. 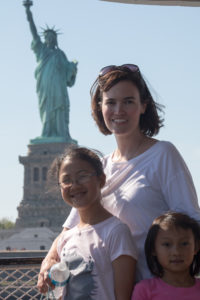 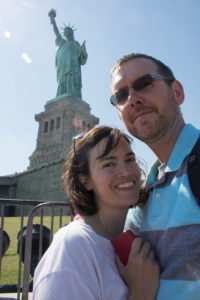 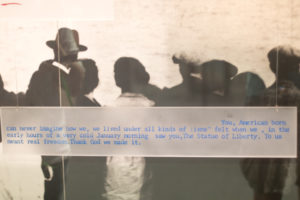 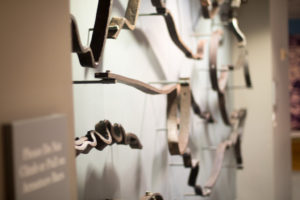 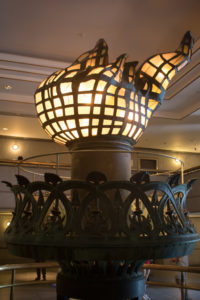 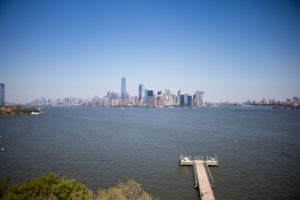 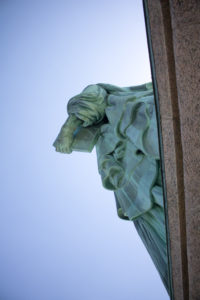 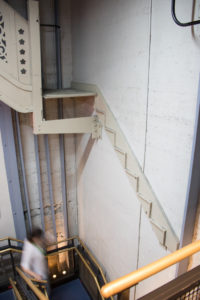 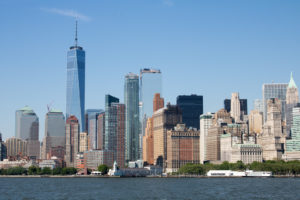 There’s a museum underneath the pedestal. Did you know that? Me, either. The Voice led us through the displays. We learned all about the construction ideas and actual process, about how the French people saved their own money to pay for the big gift and how the statue got a makeover in time for its 100th birthday. Side note: Did you buy a beautiful, shiny, silver Liberty Dollar to help out? I did; I remember using my allowance to get it and when it came in its navy box with the velvet lining, I felt like such an American. When we get our stuff out of storage, I’m going to look for that coin!

We returned the Voice so others could hear her in their heads. We bought tees because that’s what tourists do and we arrived back at the dock at 3:40 for our 4 p.m. boat ride to Ellis Island. That’s when we found out that the boat company (who admittedly had warned us they reserve the right to change the schedule any time for no reason) …had changed the schedule for no reason.

The last boat to Ellis Island left at 3:30 p.m. This boat would take us to NYC but not the island where our little immigrants could step where so many immigrants stepped. I was devastated. I barely spoke on the way back to Battery Park. Maybe to the boat people it was no big deal but that trip might be the only chance we get to see Ellis Island and without bad weather or medical emergency or mutiny or pirates or a SINKING SHIP, they decided to change the schedule and leave many of us high and dry. We paid for two islands but we only got the one. I’m still furious. I bet you can tell by how harshly I’m typing these words. Grrr! Telling you about it reminds me I’m going to write a letter of outrage. 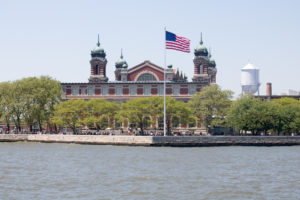 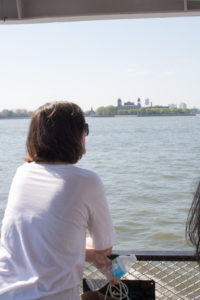 We landed. We walked. We subwayed. We found a TGIFriday’s and fell into our seats. I know we should have eaten somewhere local but at that point in my depression, I just wanted comfort and familiarity. Revived, we made our way home. I had a better attitude by the time we crashed into dreamland but between the 9/11 Memorial and missing Ellis Island, my emotions were spent that day. New York, you kill me.