Now, it probably wouldn’t have been that big of a sacrifice for me because I don’t even drink tea but in December of 1773, tea was pretty darn popular. Also, it wasn’t like it was one or two boxes–it was a supply planned for all the colonies. It took hours to toss all of it overboard and the colonists knew exactly what they were up against. They’d been ordered to unload the tea and once it hit soil, a huge tax was to be paid on it. Instead, men and boys snuck aboard and started a revolution. 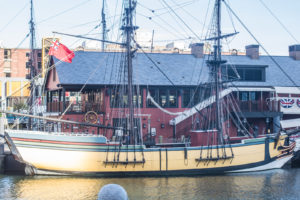 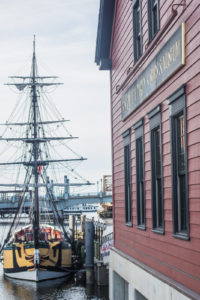 Only 116 names are known for sure because it’s not like people bragged, “Oh, I helped toss British property into the ocean last night; it was super fun!” Regardless of whether they made it public, it took guts to do what they did. Guts seem so rare these days. We all go with the flow or only whisper our real thoughts to trusted friends or hide behind our screens. I guess plenty of people ducked back into the shadows then, too. I’m grateful for the ones who didn’t.

So there’s this museum in Boston where we learned about the most famous tea party ever thrown. I loved everything about the experience. We heard Sam Adams rally patriots at a town meeting (where we got to participate and yell at King George which really, every American should do on a monthly basis, it was so very cool). Each of us received a card that told us about a real tea party participant so we could learn his fate at the end.

We used feathers to disguise ourselves and all caught up in mob mentality, we raced out to the boats and slipped on board to trash some property. In reality, the 1773 party was highly orchestrated…as a last resort but one they all pretty much knew was coming. Our girls threw tea boxes into the harbor (they’re also connected to the boats by rope so later the actors pull them back up). Amazing holographs showed us what common Bostonians thought about the evening’s activities. A couple talking portraits shared actual letters exchanged between two key players. 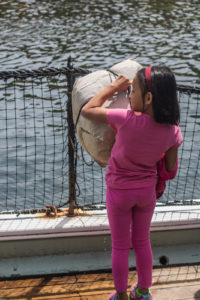 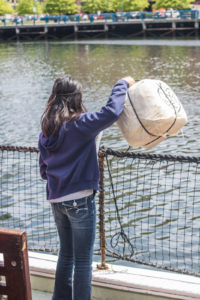 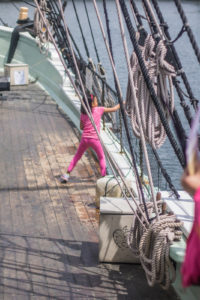 We stood in the same room with a 1773 tea box which a young boy found on the shore and hid the morning after and which then was passed down in his family for the last 240 years (at one point it was used to store dolls and a little girl painted flowers on it). Of course ain’t no way they were letting us flash our cameras at that, so you really MUST go to Boston. We watched a fantastically well-done movie that put all the action into chronological order and helped sear the significance of those first revolutionary events into the minds of our children. Afterwards, we dined in Abigail’s Tea Room and Danny sipped the five different kinds of tea the patriots dumped into the sea all those years ago. It was great. I know I end all my posts the same way telling you to GO, for crying out loud, but please listen to me. Boston is a must see for every American. 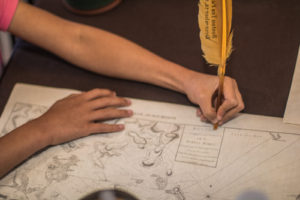 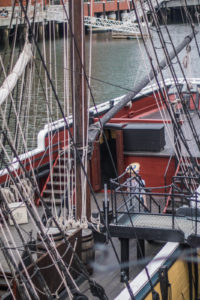 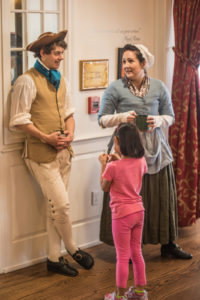 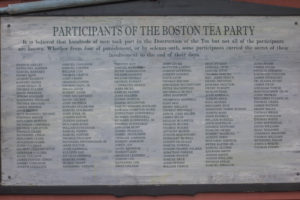 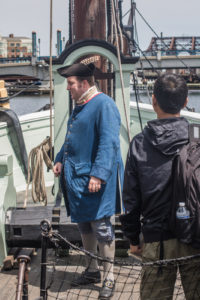 One thought on “Tea Tossing for America”